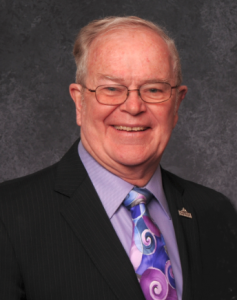 Our 2015 Grand Marshall of the St Patrick’s Day Parade is William “Bill” Duggan, a native San Franciscan, who was born into a proud Irish-American family. The Duggan Family is well known in the San Francisco Bay Area and has been involved in the funeral industry here for over a hundred years. Bill’s paternal great-grandfather, James Hagan, was a tinsmith by trade. During a serious epidemic in the early 1880’s, James Hagan made hand-soldered zinc boxes, or caskets, that could be sealed to stop the spread of the disease. He and his wife, Sarah, then started an undertaker business in San Francisco in about 1885. He made the caskets, and when someone wanted a cloth-covered casket, Sara, a seamstress, would cover the casket in black cloth and tack white material inside. In 1902, James hired William Duggan, a young Irish Catholic who was recently mustered out of the Spanish-American War Calvary at the Presidio in San Francisco. William Duggan worked as a hack-driver, casket maker, gravedigger, all around handyman and hostler for the Hagan family, taking care of the horses and wagons that took the caskets to the cemetery. In 1903, much to the dismay of the Hagan family, their youngest daughter, Henrietta, a recent graduate from UC Medical School in San Francisco, married the dashing Irish immigrant from Thurles, Tipperary.

With her marriage to Duggan, the Hagan family disowned Henrietta. Bill’s grandfather, William, went out on his own, continuing in the livery business, buying a horse and carriage, and later a limousine, to start one of the first taxi businesses in San Francisco. In 1916, William, bought William Green Undertakers and continued the next generation of Duggans in the funeral industry in San Francisco. He continued the funeral business in the Mission District, and became well known for his involvement in the funerals of the slain longshoremen in the 1934 General Strike. On Thursday, July 5, 1934 (later known as “Bloody Thursday”), the police and strikers clashed, leaving sixty-four injured and two killed. The deaths of the two ILA longshoreman, Howard Sperry and Nick Bordoise, lead to the whole city being shut down for a huge public funeral. William Duggan took care of the two longshoremen gratis, placing their coffins on Duggan’s flatbed trucks and processing down Market Street while crowds of an estimated 15,000 to 50,000 watched. William Duggan and his business were recognized as a friend to the unions and flourished.

Bill’s father Edwin “Bud “ Duggan, Henrietta and William’s second-youngest son, was just completing mortuary college during the general strike and went into the funeral business with his father and siblings, continuing the Duggan family tradition. In 1943, Bud married Madeline Healy, an Irish lass and graduate of St. Joseph Nursing School whose father and mother immigrated from Mitchelstown, Cork and Achill Island, Mayo, respectively. Bud and Madeline had four children: Bill, Maureen, Patricia and Dan. Bud was well known in the funeral business and active in the community. Bud, the then-president of the family mortuary in the Mission, worked with his siblings at his father’s business until 1963, when he decided to branch out on his own. He looked to establish a place with plenty of space that was closer to the cemeteries, which had moved from San Francisco to Colma; thus in 1963, they opened Duggan’s Serra Mortuary in Daly City. Bud and Madeline were joined by their eldest, Bill, bringing a fourth generation of their family into the funeral business in the San Francisco area.

Bill has been serving the San Francisco community in one capacity or another all his life, from being the neighborhood paperboy as a kid, to working as a page and elevator operator at the Public Library’s main branch, to his first union job at QFI Supermarkets. However, his greatest and most dedicated contribution to the community has been his work with the family business, Duggan’s Serra Mortuary. He and his family members initially did everything themselves–from the mortuary’s, to the landscaping and janitorial work, to embalming, arranging and directing the funerals. Bill’s mother, Madeline, even returned to work as a nurse at Laguna Honda Hospital to help pay the bills for their new venture. Eventually, after joining the Teamsters union, they were joined by additional employees; however, the emphasis on family and community has remained an integral part of the work they do. For instance, Bill’s mother, who was known for her Irish hospitality, always provided each grieving family with a home-cooked turkey to take home–a tradition the business still proudly continues to this day.

Bill has made his family’s services more available throughout the community as the previous owner of Duggan’s Carlmont Chapel in Belmont. Duggan’s Serra Mortuary also owns and operates Arthur J. Sullivan Funeral Home in San Francisco. Over the years, Duggan’s Serra Mortuary has taken care of many Bay Area residents, city officials, firemen and policemen in San Francisco and Daly City, including some who have lost their lives in the line of duty. It is the largest Catholic mortuary in the Bay Area and is known as a generous contributor to many charitable organizations.

Bill himself has suffered numerous difficult losses over the years. His father, Bud, passed away in 1976, followed by his sister, Patricia Stanley, in 1980. His sister, Maureen Duggan Woods, passed away in 2005, followed by Maureen’s son, Kevin, in 2010. Madeline Duggan, the family matriarch, passed away in 2011, having represented the business with her care for others right up to that time. It is these personal family losses that have made Bill and the Duggans’ staff so sensitive to the losses of those they serve. Along with his brother and co-owner, Dan Duggan, Bill has made serving each family with compassionate care their highest priority.

Bill graduated from St. Emydius Grammar School, Riordan High School (‘62), San Francisco College of Mortuary Science, and the University of San Francisco with a degree in Business Finance. He was actively involved in all school and social activities. He was elected Student Body Treasurer in his junior year at USF, was a founding member of the Irish Club on campus, and was a member of Alpha Sigma Nu, the Jesuit Honors Fraternity. In 1966, while working on his MBA at USF, Bill was called to active duty in the Air Force Reserve with the 349 Air Force Wing at Hamilton Air Force Base and was stationed in Korea during the Vietnam War.

Bill has been involved with other various organizations over his lifetime. He has been a guest speaker for hospice, as well as for volunteer organizations like HAND (Helping After Neonatal Death) and the Every 15 Minutes Program. He is a former member of Kiwanis International, the Footprinters International, Chapter #1, and served at one time as the youngest district deputy of the Knights of Columbus. He followed in his father’s footsteps as a member of YMI (Young Men’s Institute), and recently received his 50-year pin. He was formerly on the CYO (Catholic Youth Organization) Board of Directors, and also coached his children in both CYO and YMCA basketball. He is currently on the Board of Directors at Valley Memorial Park in Novato, and is an active member in the Equestrian Order of the Holy Sepulchre. He regularly participates in Riordan Alumni activities, and was honored by Riordan, along with the rest of the Duggan family, for their contributions to the school.

Bill is an active family man. He is married to Patricia Byrne Duggan, an attorney, who has the distinction of having been the first female sergeant in the SFPD. He is the proud father of four grown children, Winifred, Bill, Maura, and Caitlin, and the grandfather of two, Jackie and Sean Patrick Sullivan. He is proud to follow in the footsteps his father, Edwin “Bud” Duggan, a past President of the United Irish Societies, who had the honor of serving as the Grand Marshall of the St. Patrick’s Day Parade in the early 50’s. 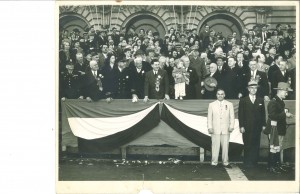 Eugene McPeake was born in Segronan, Killeter, County Tyrone in 1928, the first- born son of Charles McPeake and Catherine Corry McPeake. He worked on the farm and traveled to Scotland for work in his late teens. In 1956, his first cousin, Margaret Doran, came to Tyrone for a visit to see the land of her mother’s birth; as a result of that visit, Margaret and her brother, Charles, sponsored Eugene’s immigration to the United States. He emigrated to San Francisco in 1957.

In San Francisco, he enjoyed a long and proud career in transportation, both in local and long distance moving and storage. He worked for a variety of companies, including Market Street, Allied Van Lines, and Lynch and Sons. He was a proud retiree of Teamsters, Local 85.

Eugene became an active member in the Irish community of San Francisco.

He joined the Pearse and Connolly Fife and Drum Band and became their bass drummer. He was a member of the band for 50 years. In addition to the bass drum, Eugene played the fiddle, mandolin, banjo and harmonica; playing Irish music brought him great joy and much entertainment to those lucky enough to hear him.

He was also active in the Irish republican movement, and was one of the founders of Irish Northern Aid in San Francisco in the 1970s.

He married Bina O’Mahony in 1967 at St. Cecilia’s church. After originally living in the Sunset, they moved down the Peninsula, taking up residence in San Bruno after the birth of their daughter, Margaret, in 1970.

Eugene made many trips to Ireland where he travelled the length of the island to visit both his family in Northern Ireland as well as Bina’s family in Cork. He never tired of the journey or of finding a new place to hear a few great tunes.

His last few years were a long journey with dementia. When he was no longer able to play music, he lilted the tunes of his childhood, from the Tyrone border country, up until almost the end.

May he rest in peace. Ar dheis Dé go raibh a anam uasal.