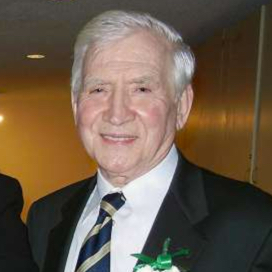 Diarmuid was born in Newmarket, in the Barony of Duhallow, in County Cork Ireland. After attending grammar and high school in Newmarket, Dermot immigrated to California in 1958, where he had family living since the 1890’s.  Dermot spared no time to begin his life of service in the States; he signed up for the draft in July 1958 and was sent to Fort Ord in 1959 for basic training.  Dermot completed basic training and reserve time in 1965. After receiving an honorable discharge, Dermot came back to San Francisco where he worked at Safeway stores and attended USF at night. At an Irish dance, Dermot met the love of his life Many Ann Leahy. They enjoyed spending time together. They attended dances, picnics at Boyes Springs, fundraisers at Mrs. Pigott’s and Abby Leary’s. Dermot and Mary Anne got married in 1962, and started their family of three wonderful children, Teresa, Michael and Brian.  They have fond memories of summers at Cobb Mountain and Whispering Pines enjoying the Irish Riviera with the Falvey’s, Dunleavy’s, Lynch’s, O’Brien’s, Cordes’,Brady’s,  Feeney’s, Teehan’s and McFadden’s.

Just as their family started to grow, Dermot entered the San Francisco Police Department in 1964. Dermot had a successful career in the Department: was promoted to Sergeant in 1970, to Inspector in 1973, to Lieutenant in 1975, to Captain in 1982, to Commander in 1991, and Deputy Chief in 1994.  Dermot and his late wife are proud that all three of their children and son-in-law work for the San Francisco Police Department.  Michael and Brian are lieutenants, Teresa a crime analyst and Ivan a police officer.  They are also very proud of their daughters-in-law, Annemarie and Martha Philpott

Since retirement, Dermot has enjoyed spending time with his seven grandchildren: Anne Marie, Julia, Michaela, Neil, Dermot, Michael and Terence. They are the absolute joy of his life.

Dermot has been recognized for his work by the United States House of Representatives, the Senate of the State of California, the Board of Supervisors of San Francisco and the N.A.A.C.P.  He also received the John F. Kennedy Legacy Award from the Irish American Democratic Club of San Francisco.

Dermot is very thankful to the Irish Community and their support they have given him and his family the past year, after the passing of his wife, Mary Anne 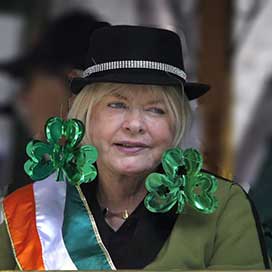 The family of the late Claire Hackett would like to express their gratitude to the members of the United Irish Societies for honoring her in the 166th St Patrick’s Day Parade.  We know she would have been pleased!

Claire was born in Bray, County Wicklow and immigrated to the United States as a young woman.  After briefly living in Chicago, it was San Francisco which she would grow to love and call home.  San Francisco is where she married and raised three children.  It was also the place where she maintained strong ties to the local Irish community.  Over the years, Claire enjoyed acting in various Irish plays as well as attending different Irish social events.  Yet, her involvement with The Ladies Ancient Order of Hibernians and her eventual role as president in 2015 was perhaps one of her greatest honors.

To those who knew her, Claire was often thought of as the “life of the party”.  She was always ready to strike up a conversation and was even known to get up on the stage at the Irish Center and share a few jokes!  Her lively spirit and quick wit left a lasting impression on everyone she met.

Claire passed away at home on January 17th, 2016 after a brief illness.  Her family would like to take this opportunity to thank San Francisco’s Irish community for their support and words of comfort over the past year.  Go raibh mile maith agat!

From the day that Rita Newell arrived in San Francisco in 1946 with her sister Mae, from County Mayo, in Ireland, she was immersed in all the Irish American Community activities in San Francisco.

Rita and Jim O’Mahoney first met at a banking class in San Francisco. Jim worked for Wells Fargo Bank and Rita worked at the Federal Reserve Bank. They met again socially at the Irish American Hall and their relationship started from there. They attended all the Irish functions at the Knights of the Red Branch Hall (KRB) and were very involved in organizing events for the young Irish community. They were married on September 4, 1954.    Rita  attended San Francisco State University where she earned a Bachelor of Arts Degree and her California Teaching Credential. Rita had a passion for education and taught Elementary School for the San Francisco Unified School District for over thirty years. Rita had a natural talent for teaching and loved making sure that the children she taught in her classroom had the basic tools to make a positive change in their lives.     Rita and  her loving husband Jim are very well known in the Irish American Community for their tireless commitment and unselfish dedication of their time, expertise and finances over the years. From the early days they were occupied joining and organizing Irish Clubs. They always envisioned a place for the Irish to call their own-a club, a community hall or Irish Center. The first meetings to discuss the idea of an Irish Center took place at their home in San Francisco. They along with many other forward looking, brave and wonderful people in the Irish American Community donated time, labor and the money, to make the United Irish Cultural Center we have today.

Rita served on the first Board of Directors of the United Irish Cultural Center and she and Jim were instrumental in its creation. Rita was also the founding Secretary. The many Irish Clubs that benefited from either Rita or her beloved husband Jim’s expertise for many years included Northern Aid, Irish Freedom League, The Connaught Athletic and Social Club, Eire Og, The United Irish Societies, the Ancient Order of Hibernians, The United Irish Cultural Center, The All Ireland Social Club and the Mayo Club.     Their dedication to a cause they believed in was tremendous. Simply put -this kind of dedication and loyalty is not common. They were selected as Citizens of the Year 2004, by the San Francisco Bay Area Law Enforcement Emerald Society, based on their relentless dedication to the Irish Community in San Francisco for 58 years (at that time). We salute Rita for all she has done to support the Irish American Community in San Francisco.

Frank James O’Rourke was a native San Franciscan and a lifelong parishioner of St. Paul’s Parish. He attended St. Paul’s Grammar School and Sacred Heart High School. Frank took great pride in his Noe Valley roots. He was also very proud of his Irish heritage, and enjoyed all things Irish. Frank was a member of the greatest generation, volunteering at age 17 to join the United States Navy and serving in the South Pacific with the Navy Armed Guard.
He was a devoted husband and father who exemplified all of those great character traits that one could only hope to embody. He was a man of quiet faith, who led by example. He taught his children the importance of family, honor, loyalty, perseverance, respect, and most of all, the importance of maintaining a constant relationship with God
Frank joined the San Francisco Fire Department, where he served with distinction for thirty-one years as a proud member of Local 798. After he retired as the Captain of Engine 15, he maintained camaraderie with his fellow firefighters as a member of the San Francisco Retired Firefighters Association.
Frank was a volunteer at Kaiser Permanente with the Mended Hearts. He also was a Charter Member of the United Irish Cultural Center. He loved spending time with his family and enjoyed traveling with the love of his life, Mary. Their many trips to Ireland were especially memorable, visiting family and tracing his Irish roots.
A true native San Franciscan, Frank loved the home teams. He spent countless hours watching the Giants and the Niners and he especially enjoyed the Warriors championship run. He also followed Notre Dame Football, and seldom missed a televised game.
Frank was known for his wonderful sense of humor, his words of wisdom and his engaging story telling. Frank lived a wonderful life. He was loved by many and respected by all. Frank’s devoted wife of 63 years, Mary, their seven children and their families are very proud and grateful that he has been named Honorary Grand Marshal of the 2017 St. Patrick’s Day Parade. They know he would truly be humbled by this great honor.